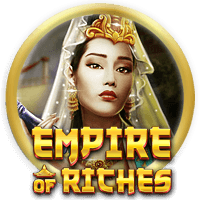 A stunningly beautiful slot machine, Empire of Riches has some excellent features and a lot of potential for big wins. In addition to the re-spin feature, which is activated after each win, you can earn up to 10 free spins with a multiplier of up to 10x. If you’ve never played a Dragon Gaming slot machine before, you’re going to want to check out the rest of their catalog.

China is the setting for the game’s storyline. Symbols of wealth, such as antique vases, feature prominently in the artwork. Smaller prizes can be won by spinning the traditional playing card suit symbols. The music, which is traditional Chinese music, is the perfect accompaniment to the game. Additional sound effects are played when you win or activate any additional features. If you like this game, you might like Matsuri.

Empire of Riches: How to Play

While it may appear to be a complex betting structure, it’s actually quite easy to understand because the bet sizes are fixed and there is no need to worry about placing bets on individual lines. The only thing you have control over is the coin bet display; otherwise, the game takes care of everything else. Get started with Empire of Riches by following these detailed instructions.

1 – Initiate play and observe how long it takes for the introductory screens to complete. First-time players will find a wealth of useful information here!

2 – Locate Coin Value and use both arrows to scroll through different coin sizes. As you scroll down, the amount of your cash bet (the one next to it) will change. Stop betting when you’re satisfied with your total bet size.

3 – As soon as you press the spin button, you’re off and running.

The autoplay feature is simple to configure. Simply select the desired number of spins from the drop-down menu after clicking the autoplay button. Autoplay can be stopped at any time by reactivating it.

Size of Bets and Winnings Payed Out

There is a minimum bet of 25 coins, and the highest-paying symbol in the game is the female character, which pays 150x your bet on a single payline.

Bonuses in Empire Of Riches

Bonus features include a re-spin feature and a free spins round. To begin, let’s examine the re-spin function.

The Re-Spin Feature of Empire of Riches

The three bonus scatter symbols on reels 2, 3 and 4 activate this feature. Five free spins will be given to you. Every win activates the re-spin feature, just like in the base game. This time, the re-spins have a multiplier attached to them! The multiplier can rise to a maximum of 10 with each subsequent re-spin. Huge wins are possible because of this, so keep your fingers crossed for more re-spins! To see more games with the free spins feature, click here.

The Final Word On Empire Of Riches

8/10. You can’t go wrong with this game, and we especially enjoy the re-spin feature after every win! Although this game has its advantages, the re-spin feature is a major drawback. But it’s still a lot of fun. In addition, the graphics and the novel layout of the reels impress us. If you don’t mind a few dead spins, the high frequency and size of the payouts make this a fun game to play.